This morning I read the Parade in the Minot Daily News.  Under Things to Do by the End of the Year it talked about volunteering.  “A meta-analysis of five long-term studies published in August reported that people who volunteered were,on average, 22 percent less likely to die over a period of four to seven years than similar people who didn’t volunteer.  Helping others may lower some well-known cardiovascular risk marker.  Maybe the volunteers that picked up trash along the ditches this past week were thinking of the exercise, but they seem to be the same people who are involved in other civic activities.  They are members of the Anamoose Civic Club and Happy Feet organizations.

This is the second time this year that we have cleaned the ditches from Lowell and Linda Dusek’s to the Arthur Co. Fertilizer Plant.  There wasn’t a lot of liter, yet many orange bags were filled. Pictured above is Norma & Stan Martin. 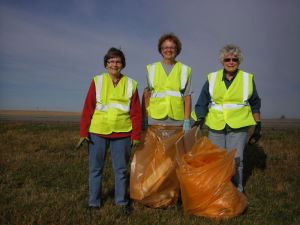