The School Doesn’t Sit Empty During the Summer

I had heard they were putting new linoleum at the school, but when I went there today I found all kinds of activity.  I first hunted for Tom’s Home Furnishing’s flooring crew.

Randy Vetter, and his crew of 5 from Harvey are putting linoleum down in all the classrooms and halls.  They started on Monday, June 8th and figure it will be 6 weeks before they are done.  The crew consists of Randy Vetter (Flooring Technician), Derek McClintock, Ryan Engen, Quincy Marchand, and (not pictured) Spencer Marchand, and Brent Wagner.

In the north school section I found the H. A. Thompson & sons crew that is installing new unit ventilators, air conditioning, temp controls, and boiler pumps.  All the school rooms except the office, gym and shop will have a heating and air conditioning unit.  This project will take several weeks. 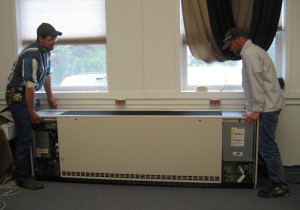 As I was ready to leave the north end I came upon the new Anamoose grade principal Melissa Melaas painting her office.  Now that is a good way to get the color you want! 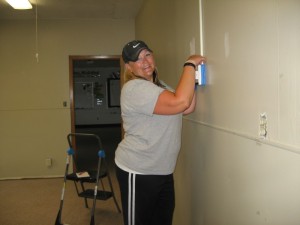 Before I left  I quizzed Superintendent Steve Heim on the new school addition.  The school board just voted to add a new Day Care and PreK.  The 50×30 addition will be on the east where the buses are now parked and will match the old school.   Heringer Lumber got the bid and Becker Construction will put the building up.  Plans are to start construction in the fall, but the plumbing and heating can’t be done till later.