I took pictures of a few of the cute Halloween costumes that I saw at my front door on Saturday evening. 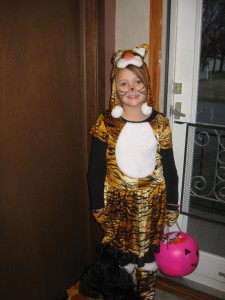 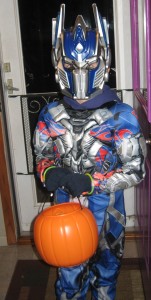 Jacque Reis told me today that in the late 40s & into the 50s the gym on Main Street (building west of Post Office) was used on Halloween night for games  & contests.  The kids would first go to the stores to get treats & then the whole family would go to the gym for the evening.  One favorite games was kids doing  possum dancing, where they would follow the leader through the crowd. “Kiss the Frog” was a popular booth where if you kissed the person in costume you got a prize.  Most of the time this was a witch.  Tickets were bought at the door that could be used for different booths & games  The older people would sit up in the balcony where they could see all that was going on.  Very few kids  went to the  homes for tricks & treats.

Jacque Reis’s dog, Zak, had absolutely the best time with handing out candy.  He loves kids & does his little tricks for those that come to the door.

Halloween is increasingly a time to put costumes on your pets.  “Dogs are the new kids” says Robb Horem, owner of Dog Savvy.  $330 million is spent at Halloween for pet costumes, and $350 million for kids & adult costumes.