Christmas Eve morning wasn’t a typical Christmas Eve for Mike & Connie Rudnick when they awoke to find the house south of them on fire.

Connnie woke up at 1:43am to a swooshing sound.  Mike mostly heard a popping sound which they later decided was the nails popping out of the siding on the south side of their house.

When they looked out they discovered that the Ralph Volson house just south of their home was engulfed in flames.  They immediately called 911 & helped their daughter, Mindy,& their grandchildren, get to safety.

The Fire Department had the fire out by 5:30am, but the house was badly damaged.  The Fire Marshall & 2 McHenry County Sheriff deputies investigated the fire & are treated the fire as a criminal investigation.  The house has been empty for a year & was listed for sale with Century 21. 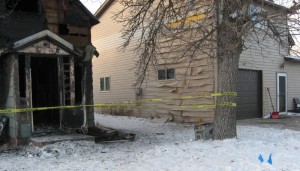 The siding & insulation on the Rudnick house was melted & bubbled.