It was a beautiful fall day in the neighborhood! The sun was shining brightly inviting everyone to the Anamoose Fall Festival on Saturday, September 17th. A Soup & Sandwich lunch was being served at the VFW Hall by the Auxiliary to get everyone started.

While folks were enjoying their lunch a bevy of Classic Cars appeared on Main Street with the sounds of Golden Oldies music filling the air and generating energy and anticipation for more.  Dave Wangen made arrangements for the car owners to pay Anamoose a visit and show off their prize cars.  What a beautiful collection of metal and memories!  Remember the parade of cars on Saturday nights on Main Street? Steve Kuske & Dakota Sound & Light provided the music for the car show. People were able to take a musical stroll down memory lane while checking out all the cars. 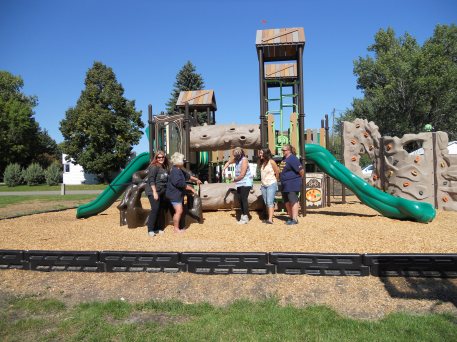 In the City Park kids of all ages were exploring the brand new playground, bouncing in the Bouncy Houses, taking rides on the horse drawn wagon around town and enjoying a variety of treats provided by the Park Board members.  The Park Board ladies took this opportunity to dedicate the new playground they worked so diligently over the past 3 years to make a reality, with awesome support from the community.  Seeing all the smiling faces and taking a quick off the cuff survey of the end-users, I would say the Park Board knocked this one “outta the park”. 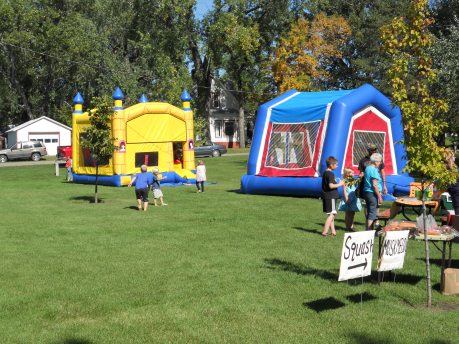 Over at the Anamoose Senior Center things were beginning to happen.  There was a steady stream of people dropping in to leave pies for the Pie Social at the Center.  All kinds of pies!  There was apple, pumpkin, rhubard, raisin, blueberry, chocolate, peach and oh my . . .

While everyone was choosing their favorite kind of pie to have with ice cream and coffee the The Belles & Beaus Square Dancers were getting ready to entertain and have some fun.  Plenty of toe tappin’ music and skirts twirling while changing partners and promenading and all.  Fun to watch the teamwork in action!

The Park Board served a Spaghetti Supper at the VFW Hall as a fundraiser and got everybody ready for comic entertainment.  After a tasty meal and sweet desserts, everyone was ready for some entertainment.

The Not So Newlywed Game was offered up as a lighthearted look at local couples and how well they know each other.  Kim Meckle served as the cruise director through a sea of questions for the four couples who willingly subjected themselves to this inquiry into their private lives and thoughts.  Ron & Sandy Cartwright, George & Shirley Schnellbach, Angie & Scott Mack, and Karissa & Carter Gahner were the participating couples.  Lots of laughter was served up during this event, which went into overtime to break a tie score.  Everyone enjoyed the good humor!

Dusk was falling upon Main Street and the music was beginning to rise up out of the Music Box.  even5 had taken the stage and was prepared to rock out the rest of the night to bring this community Fall Festival to a close.  Music was great and the program full of diversity with notes and tunes for all.

It was a wonderful day in the neighborhood!  Everyone had a very good time!  Anamoose can be proud of bringing its community together to celebrate their city and the people who live there.

See all of you next year for the 2nd Annual Fall-Fest!