Anamoose on the Move

I started to think back on all the improvements in Anamoose over the years, and there have been many.  In 2006-2008 Anamoose was in the Horizons program, a community leadership program to reduce poverty.  Along with 21 other North Dakota communities, Anamoose finished the 18 month program in June, 2008 with “the wedding of Joe and Ana-Moose”.  that was when Ana was added to the Anamoose welcome sign.

The biggest and most expensive improvement was paving our streets.  It is great to see kids and adults alike out skate boarding, riding bikes, running, and walking.  I certainly don’t miss raking gravel out of my grass in the spring, and cleaning my windows every time we had a wind from the east.  In addition, the City Council purchased a Skid Steer in 2015 that has attachments for snow removal, snow pushing, a broom  and bucket that have helped with maintaining our new paved streets year round.

Three years ago the Anamoose City Council also purchased new spray equipment to be mounted in the box of the city truck; and, hired Brady Schmaltz to spray the city for mosquitoes at least once a week.  This has made working outside and in yards so much more pleasant, especially in the evenings.

A new business on Main Street, the FARMtastics Heritage food Hub, will open next year.  The old post office on Main Street has been undergoing a complete renovation to accommodate the many aspects of the food hub.  USDA-Rural Development awarded a grant to renovate the building, as did the ND Dept of Commerce-APUC (Agricultural Product Utilization Commission).  This being the first and only food hub in North Dakota, the USDA-Rural Development is especially excited to be a part of this project in Anamoose.

What is a food hub?  A food hub is a regional/state location to which small growers bring their vegetables, fruits, and berries to be aggregated (gathered together) to be sold as larger lots to restaurants, grocery stores, hospitals, schools, and other related locations.  This aggregation enables small growers throughout the area/region/state to sell their limited amounts of produce at better prices than what they are able to charge at farmer’s markets.  Smaller growers also will be encouraged as a result of this service to expand their production to increase their profits.  The benefit to Anamoose itself, will not only be increased tax revenue; but, also the opportunity to purchase a wide array of fresh produce locally.  During the winter months, the food hub will process left over fruits and vegetables to sell on line as dry soups, syrups, jams, goat cheese, and many other items.

Two other businesses have been started.  Spear Point Arms was just started in September.  Scott and Rachel Spear buy and sell guns and do gun transfers. (See previous blog.)    The other business,  Helm Flying Agronomy, located north of town on Main Street ; was opened in 2011.  In September,2015, the business was sold to Farmers Union Oil-Anamoose. A new seed treatment was added in 2015.  Tony Martin is the manager. 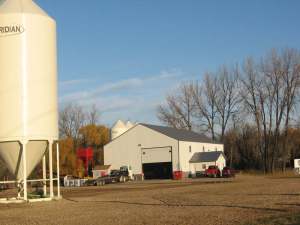 The Arthur Company expanded their business by building a new Agronomy Center on Highway 52 east of Anamoose.  See http://www.anamoose.com-Anamoose Announces for article on open house on September 7,2014.

Many new Christmas decorations have been purchased by the Civic Club and the City Council.  Maurie Becker has been the chairman for this project of replacing old decorations and adding more to the side streets where he has built hangers for the light poles.  In addition, he has built storage hangers in the City Maintenance building which keeps the decorations in stable and clean condition-off-season. 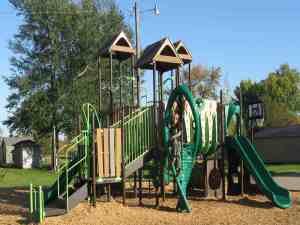 The Park Board held many fund raising events and wrote grants over the last 3 years to raise the money for new playground equipment in the park.    Four old cottonwood trees were removed and the area leveled.  The equipment was dedicated at the Fall Festival on September 17,2016. 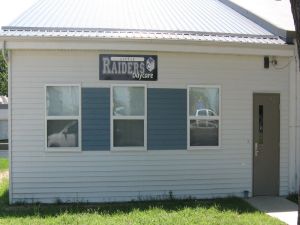 With the death of Pat Jund who operated a day care in Anamoose for many years, the town was left without a much needed daycare.  The Anamoose School stepped up, requested and was awarded USDA funds to build a new Little Raiders Day Care on the northeast end of the Elementary School, which opened in the fall of 2015.

New Anamoose Welcome signs have been installed north, south on Highway 14, and east on Highway 52.  Last year the landscaping in front of the south entrance welcome sign was redone.

The Anamoose Job Development Authority (JDA), an economic development organization, was activated again and meets monthly.  They have a Revolving Loan Grant from USDA of $99,500 to give in low interest loans to parties who are interested in starting a business or expanding an existing business.

The Anamoose Area Community foundation (AACF) that was started with money from participating in the Horizons program now has total assets of $192,899.  They have given out 34 grants for a total of $42,853 since 2008. 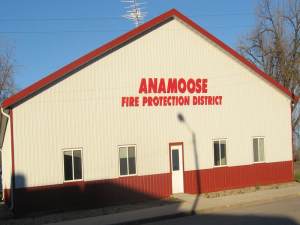 A new fire hall was built on the northwest end of Main Street in 2007.  They have about 25 members, with Jeff Lemer as Fire Chief.

Beautification is being promoted.  The City Council adopted ordinances related to keeping yards mowed, trimmed, and free of junk.  It also monitors the applications of these ordinances; and, provides a large dumpster for items that can’t be picked up during regular garbage pickup.  This is part of the Spring Clean-up Week sponsored by the City every May, as well as a Saturday during clean-up week to pick up dead appliances and other metal objects as a service to the town residents.  The council also paid for hanging baskets and large pots of flowers every summer; the Civic Club assisting with this expense. 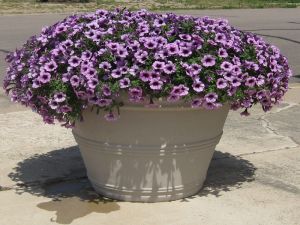 Local businesses sponsor a recycle trailer that receives plastic, paper and cardboard for recycling by HAV-IT in Harvey.  In addition, a 20″ x 10″ grass/leaves compost site was built on the north end of Anamoose to encourage residents to use, rather than making weekly trips to the land dump west of town.

The classic old city fire truck was purchased by the Council so it can be used to water trees, flood the skating rink, and flush the sewer system on a regular basis.  In 2014, the sewer lines were flushed for the first time in many years.  A new lawn mower is co-owned by the park board and the city.

Our water supply was changed to Rural Water about 2008-2009 when it became clear a major updating of our treatment plant was needed.  Now the city no longer has to pay the maintenance expense.

Remodeling of the 1909 Historic Bank will soon be commenced after receiving a $218,642 grant from USDA-Rural Development.  The building will be leased upon completion as the 1909 Steakhouse & Saloon.

A Home Rule Charter was sought and passed during the primary election in June, 2008.  This charter established a 1% sales tax that is used primarily for infrastructure, snow removal, and other city maintenance expenses.

Several years ago the Anamoose Park Board raised money to put up 100 Fallen Veterans Memorial plaques on light posts about Anamoose.  The veterans were mainly from World War I and II.  The Park Board still has over 50 plaques yet to purchase.

About 3 years ago garages were added to the south side of the Anamoose Housing Complex.  There is room for 8 vehicles.  Esther Doubek remarked “We are all real happy as we don’t have to scrape our windows in the winter”.

Trees have been removed and many new ones planted as I have blogged about recently.

Other projects that were started with the Horizons program and have continued are:  this blog and the Anamoose webs site, a monthly calendar now published by Jacque Reis, welcoming of all new residents, welcome package for hunters, lots and homes for sale listed on the web site, Market in the Park, Sunday Brunch at the Anamoose Senior Center the first Sunday of each month, and the skating rink was moved to north of St. Martin’s Lutheran Church and is flooded annually by the city.

I have no doubt forgotten some; I’m sure new ones will be added; and I am sure that we will continue with other projects in the future.