The new Civic Club Anamoose sign went up this afternoon.  The sign was made by Midwest Graphics; Keith Reinowski, owner, and designed by Angie Mack.  It is 8 x 16 and is made of aluma-corr, an aluminum faced and backed sign substrate. 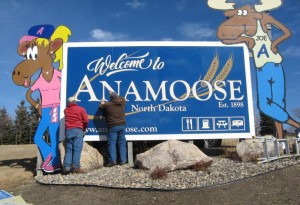 Keith, Angie and Scott Mack, and I were trying to remember the history of the sign.  The original sign was made by Jim Kapfer.  I called him in Minot.  Jim and his wife Sharon figure that it was made about 20 years ago .  It featured the railroad since all the towns were built along the railroad.  We thought Joe Moose was added about 2005 and Ana was added when we finished our Horizons program in 2008 and we had the wedding of Joe and AnaMoose.  Let me know if you have  any more history of the sign.

Keith started his business in 2001 and has made over a thousand signs.

Later—-I found an article that told of the adding of Joe Moose to the sign, but it had no date on it.  Joe was “the brainchild of local artist, Pam Heim, who volunteered to design the friendly greeter for Anamoose.”  I called Pam & she thought Joe was added in 2002.  Angie Mack designed Ana.